The Long House -completed in 2008- is a beautiful light-filled space. The design contrasts the heavy stone construction of the existing structures with the transparency of the new upper level extension sitting lightly on them, and cantilevering through the free-standing screen wall to the east.

There are two double bedrooms, a bathroom and utility area downstairs.

Upstairs is a large open plan living area with a big glass frontage displaying the most magnificent sea-views. Large sliding doors open out onto a terrace. The ample old dining room table can sit 8 to 10 people comfortably. Alongside, the kitchen area opens out to a small terrace that captures the morning and evening sun. Comfortable sofa’s and chairs surround the modern stove/fireplace.

Built to the highest standards, with geo-thermal heating, a heat-recovery system and air conditioning it is a superbly relaxing environment. The seas and weather surround you. 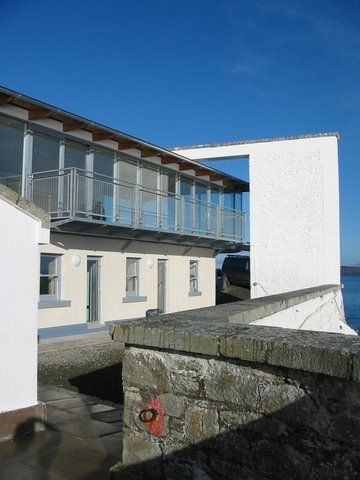 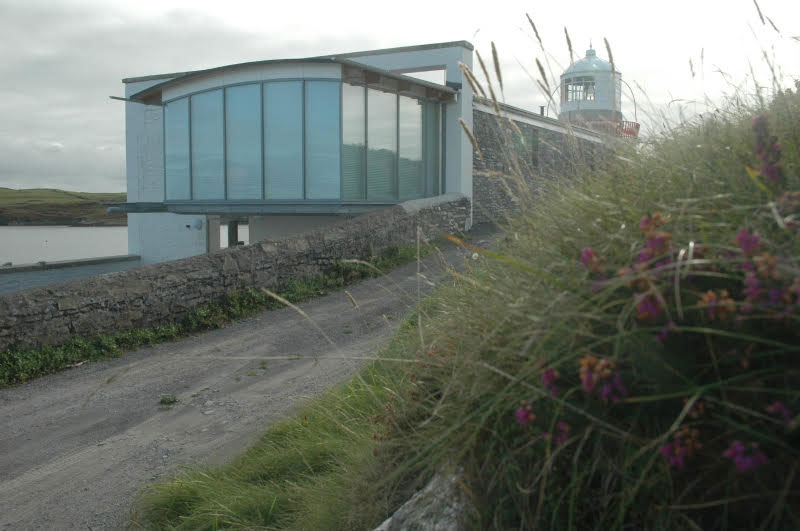 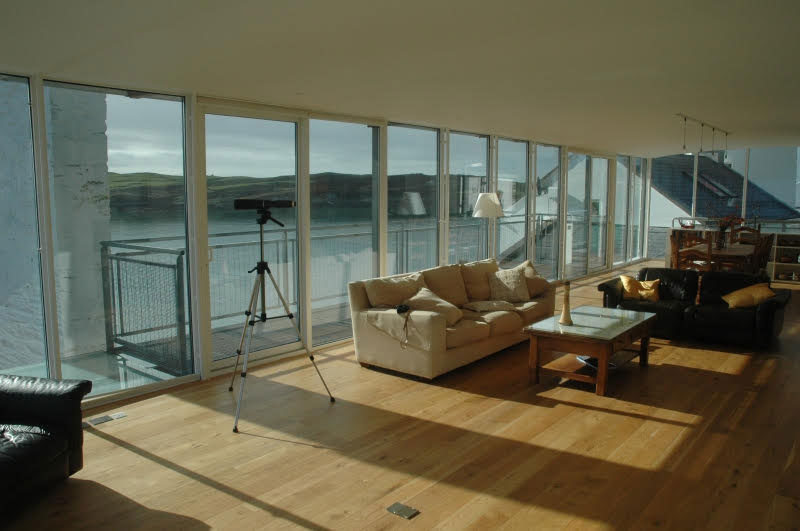 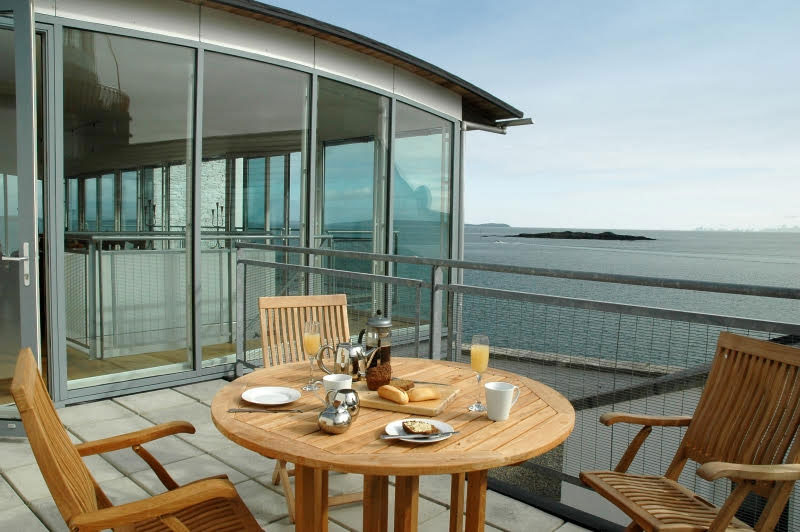 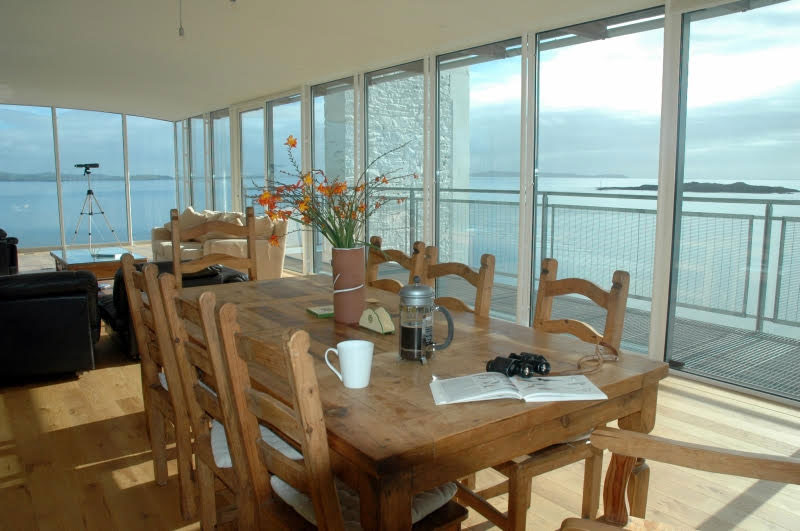 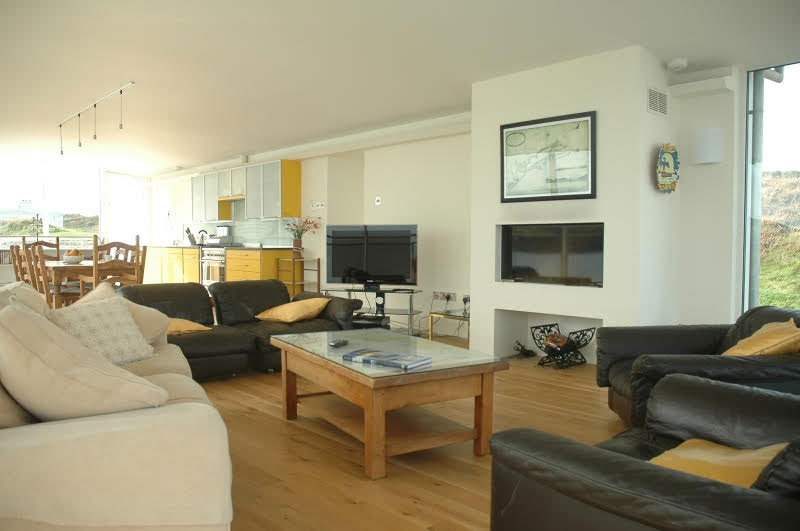 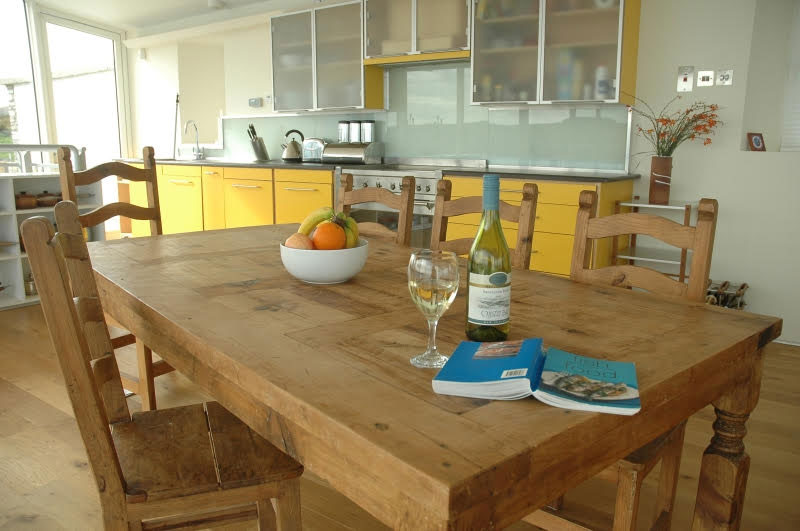 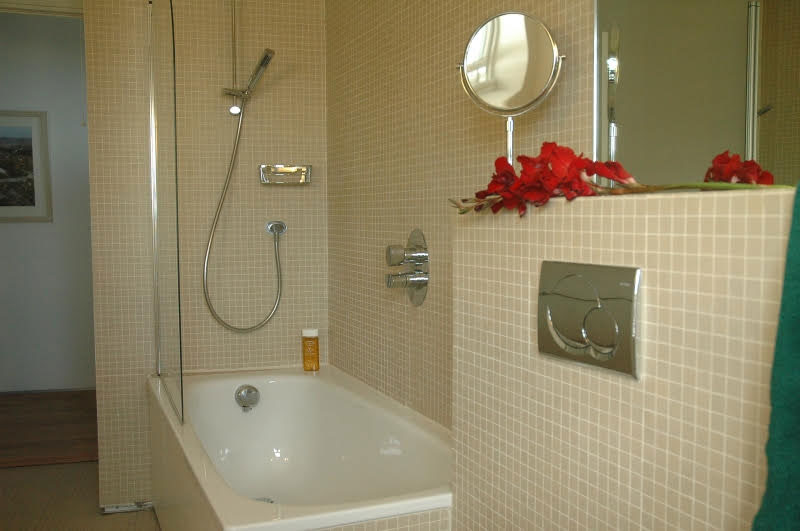 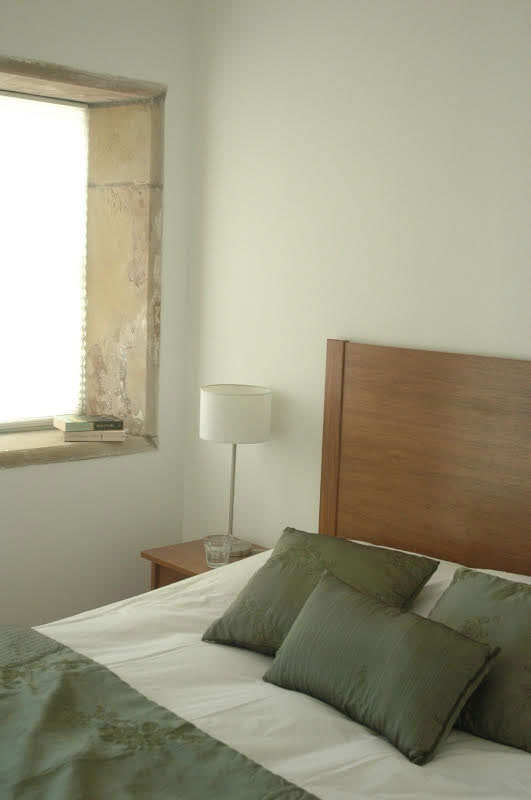 The property consists of two structures. The original cottage, dating from 1843 was fully renovated in 1999 and re-decorated in 2019.

Downstairs it has a large hallway, two twin bedrooms, a dining room, a kitchenette, a marble-tiled shower room and a study (with a sofa bed). Upstairs, accessed through the study, has been transformed into a beautiful big living room with large roof windows looking out at the ocean below.

Furnished in a modern minimalist style, many of the old features of the cottage have been retained: the old doors with their heavy copper doorknobs; the stone floor in the hallway; and the wonderful old oak floorboards in the upstairs living room. 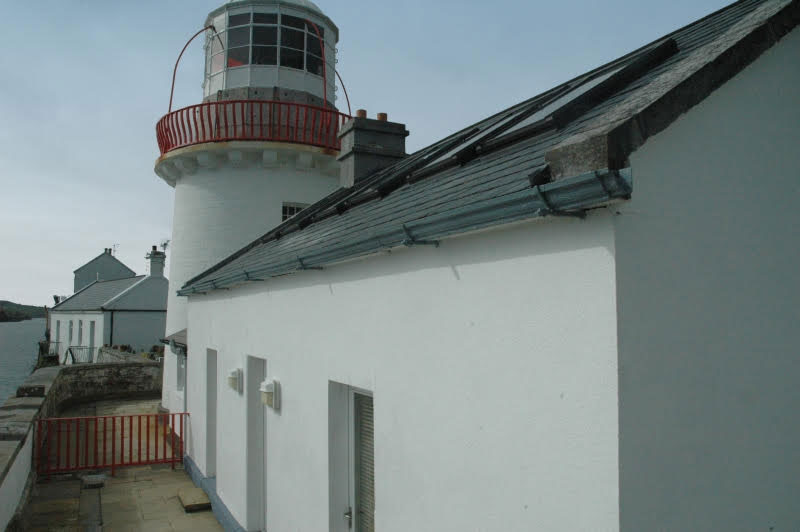 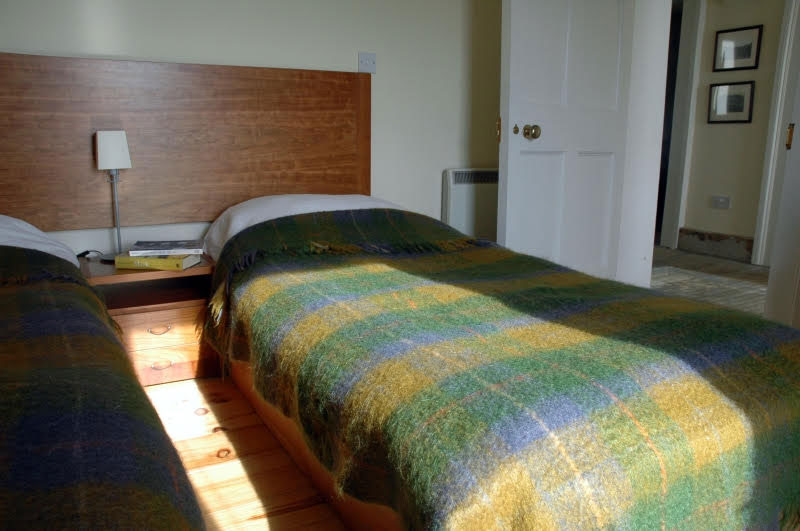 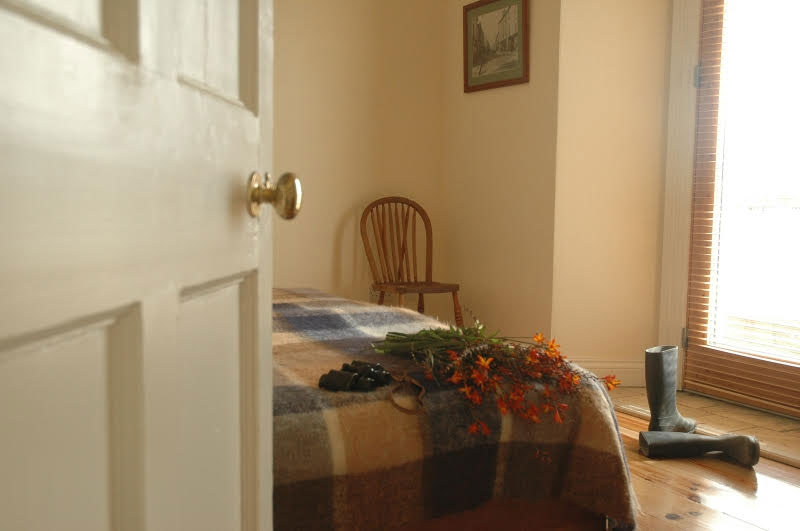 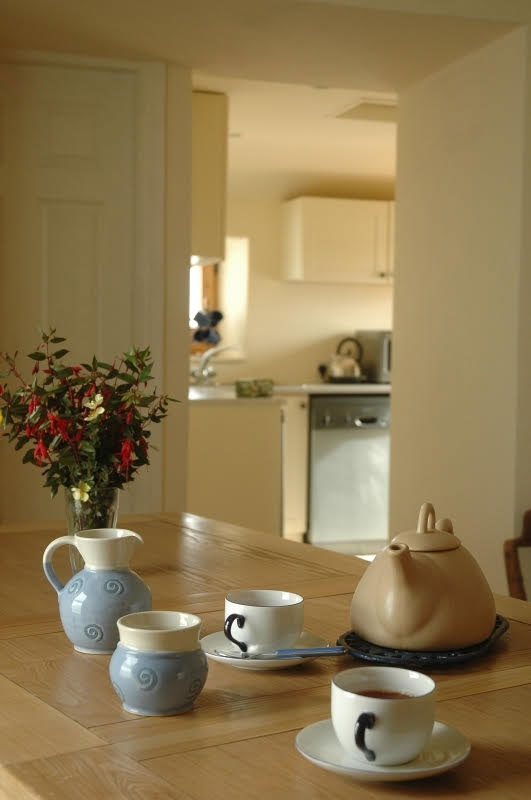 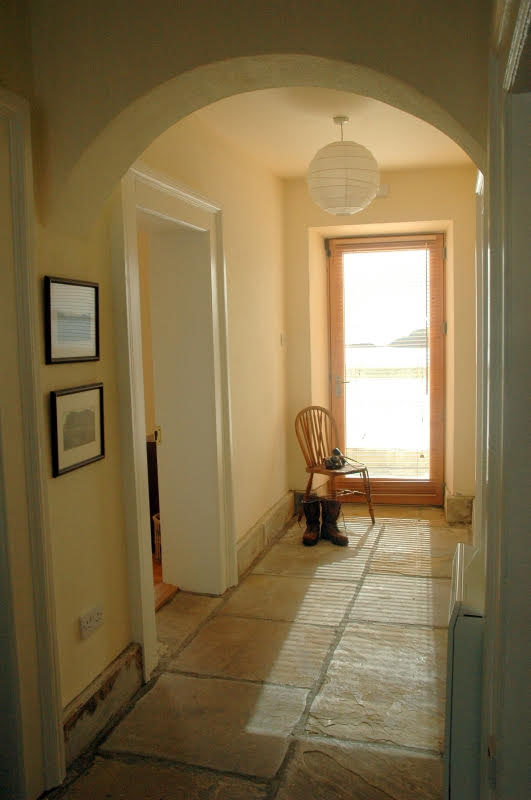 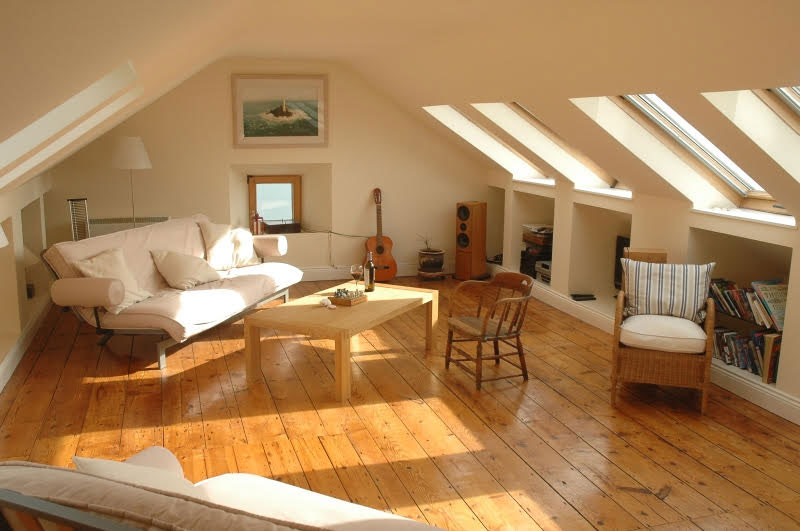 The History of The Lighthouse

Rock Island (Oilean na Carriage), where the lighthouse cottage is located, is a townland in the parish of Kilmoe, Ireland’s most south-westerly parish. It is two km south of the village of Goleen and at its nearest point, by sea, 0.5 km north-east of Crookhaven village. Located at the north entrance to Crookhaven harbour, now primarily used by pleasure craft in the summer months, it was heavily used by coastal craft, fishing fleets and transatlantic sailing craft for hundreds of years. It is an excellent harbour providing shelter from most winds. With this shelter came its economic significance as a provisioning port.

In the early 1800s the whole of Rock Island was owned by Lord Riversdale. Riversdale may have been the descendant of Arthur Annesley, the first Earl of Anglesea, who was granted large areas of West Cork after the uprising of 1641. The second Lord Riversdale sold Rock Island in March 1816 to Richard Notter whose descendants still live in the area.

The population of the townland since 1841 was:

With regard to justifying a lighthouse here, Daniel Coughlan, Lloyds’ Agent in Crookhaven, wrote to the Dublin Port Ballast Board (who looked after Irish lighthouses at the time) on the 6th of January 1838 “I take leave to say that humanity, as well as the mercantile public good of the U.K., much require a beacon or light at the entrance of this port, which if placed there long since, would have saved many lives and valuable property.”

Coughlan included a list of 20 vessels lost in his lifetime which included the Darthula of Newfoundland lost in 1822, the brig Mary, which had come from the West Indies with a cargo of sugar and coffee, and the Thomas Worthington of St John, New Brunswick, Canada which was lost in the harbour in 1836.

From 1843 until 1904, a lightkeeper lived in the cottage and was responsible for lighting the lamp at dusk and extinguishing it at dawn. A six wick burner was installed in 1903 which reduced the workload and off-duty Fastnet keepers looked after the light. This was replaced by an unwatched acetylene lamp in February 1911. The acetylene gas however exploded in the lighthouse on the first night – the 17th of February, fortunately injuring no-one. At this time the lights “character” was 2.5 seconds light followed by 5 seconds of darkness. In 1964 the light was changed to its present character of 2 seconds flash, 6 seconds eclipse. The light was converted from the acetylene generator to electricity in 1976.

Every year keepers had to paint the lantern inside and out, the gallery, gates, iron fences, gutters and downpipes, oil tanks and flagstaffs. The annual whitewashing, cleaning out of “ashpits, cesspools, etc” was to be carried out as soon as possible after the 1st of April. The cottage also had to be maintained in ship-shape condition as unannounced inspections were regular as well as the annual Commissioners’ inspection.

The keepers were provided with an allowance of eight tons of Scotch coal or seven tons of English coal every year. The keeper here could have expected to earn 3 shillings per day in 1905.

In 1938 the cottage was occupied by one of the Mizen Head keepers. Significant repairs were required that year costing £117. By 1959 most of the houses, including this cottage, were not occupied by the keepers who were allocated them. They tended to return to their homes elsewhere when on leave. In 1961 the decision to abandon the dwellings was made by Irish Lights. They sold all the remaining cottages in 1963 but retained this cottage in case they needed to locate a keeper on site. This cottage was finally sold to its present owners in 1998, a family with deep roots in West Cork. Having extended the accommodation in 2008, the family is happy to share it’s vacation home with visitors when family members are not using the property.

"Dreaming of ocean views? Your wish is easily fulfilled on this island nation, where cows and sheep outnumber people along the stunning, undeveloped coastline. Topping the list: the luxurious lighthouse in the southern village of Crookhaven — complete with floor-to-ceiling windows revealing the Atlantic’s hypnotic blue waves.” U.S Airways Magazine, January 2012